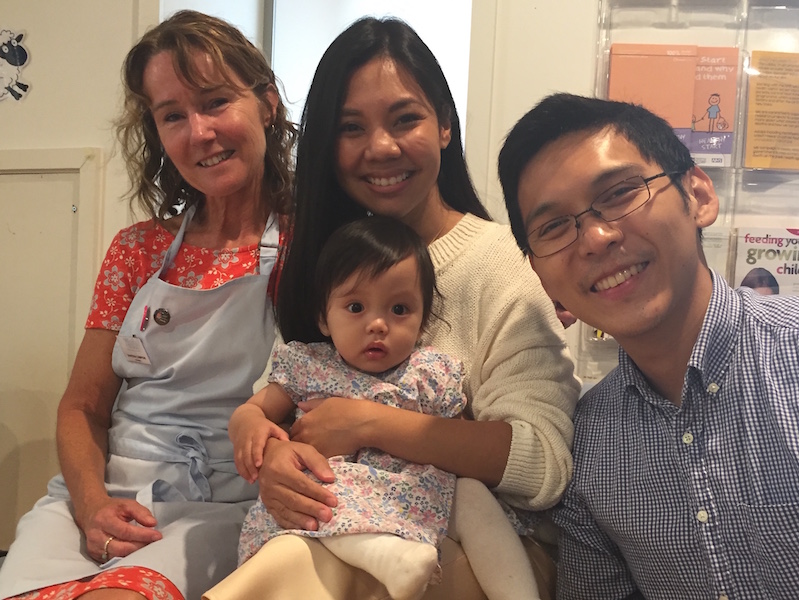 Lani (centre) with her family and OBS Volunteer Vanessa (left)

In the fall of 2018, my husband and I found ourselves confronted with two major life changes: becoming new parents, and moving across the globe from Manila to Oxford. A transcontinental move can be quite stressful, but doing it with a newborn is downright frightening.

Big move aside, our early days of parenthood had already had its share of challenges; as a first time mum, learning to breastfeed was an uphill battle for me –and I seemed to be losing. I was doing everything I thought I should be, and yet my milk supply waned.

Formula was out of the question. I didn’t even like saying the F-word. Both my husband and I are physicians, and our medical training had it drilled into our heads that breast milk was not only the best option, it was the only option.

I was nearly obsessed. I fought through the nipple sores. I latched my baby as much as she liked. I diligently switched breastfeeding positions. I pumped in between latching. I consumed every galactagogue I could get my hands on. And yet my milk could not keep up.

It so happened that we had friends and family who had babies around the same time we did, and we benefited from their oversupply of expressed breastmilk. I was simultaneously grateful for the help, but also ashamed. I sobbed every time we received a cooler of frozen breastmilk. Why could other mothers do it for their babies, and I couldn’t do it for my own? I could not will my body to comply with the ideal standard I had in my head. I told myself that I had failed as a mother, a wife, a doctor, a woman.

Leaving for Oxford meant, among other things, losing that support network. We were headed to a place neither of us had ever been to, and where we knew nobody.

Leaving for Oxford meant, among other things, losing that support network. We were headed to a place neither of us had ever been to, and where we knew nobody. Determined to continue breastfeeding, my husband and I literally Googled “Oxford breastfeeding support group,” and that is what led us to OBS.

I first met Charlotte, Vanessa, Pat, Luba and Jayne at the drop in sessions at Jericho. Over time, I began to appreciate the intricate and delicate balance between art and science that is breastfeeding. Things slowly became less muddled, and I realised that not even my medical training had been enough to see me through my own journey of breastfeeding. I needed those regular sessions to ask questions (I never ran out), to clarify misconceptions (there are so many), and to fine tune as my baby grew and her needs changed.

The answers to my questions always came freely –without cost and without judgment. In the end, I did have to supplement with formula. It took a while for me to come to terms with mixed feeding. At first, whenever I was out with my baby and it was time for a bottle, I would hide so nobody could see. I was still ashamed. Charlotte was there to repeatedly reassure me that despite needing extra support, I was still breastfeeding, and my baby continued to get all of its wonderful benefits. She told me all the time I was doing a great job. She told me they were always there for me. I took all of it to heart. As I saw my baby grow and gain weight, I began to relax and finally enjoy motherhood.

Once I had settled into the groove of mixed feeding, we chatted about other things: when my baby started teething, we talked about my fear of getting bitten and how to deal with it; we spoke candidly and at length about how traumatizing my experience had been, and about some of the things we could do differently if and when we had another baby. We even talked about my diet and post-pregnancy weight concerns!

It was a wonderful place to learn about other references as well. Charlotte and Jayne have recommended books and websites that I rely on until now. In this day and age when anyone can post anything online, it is so important to have credible sources.

The lovely ladies of OBS were the first people I met in Oxford. They were my first friends. I met other mums at the sessions too, and I am still in touch with some of them today. The truth is, my breastfeeding concerns weren’t always pressing, but I enjoyed going just to get out of the house and have a cup of tea with friends. My baby enjoyed it too, loving the chance to interact with younger and older kids.

Today my baby is 15 months old and is still breastfeeding. I top her up with bottle feeds as well as breastmilk I’ve expressed in between latching. The outcome might have been different without OBS; mixed feeding can be a slippery slope, and I’m not sure I would have been able to maintain my breastmilk supply without everything they had taught me.

When I was overwhelmed and lost, I found what I needed at OBS: acceptance, empowerment and encouragement. Breastfeeding has been one of the hardest experiences I’ve ever had to go through –physically and emotionally- but OBS helped me overcome those hurdles and fully embrace my personal journey of breastfeeding and motherhood.

It’s hard being a parent. There is immense pressure especially on mums to be able to do it all, and I felt consumed by that pressure. When I was overwhelmed and lost, I found what I needed at OBS: acceptance, empowerment and encouragement. Breastfeeding has been one of the hardest experiences I’ve ever had to go through –physically and emotionally- but OBS helped me overcome those hurdles and fully embrace my personal journey of breastfeeding and motherhood. It was at those Wednesday sessions that my experience of motherhood started to take a turn for the better, and for all this, I will always be grateful.